1. The man hit by a car yesterday would have died if the doctors had not immediately
operated on him.

From the above sentence, we may conclude that ...
A. the man will be immediately operated on
B. the man is still alive
C. It's too late to save the man
D. the man died after the operation
E. the doctors did not operate on him
Jawab : B
Kalimat diatas adalah conditional type 3, yang berarti faktanya bertentangan dengan conditional nya: fakta = The man did not die, because the doctors operated on him.

2. "If I had known that you were in Surabaya, I would have shown you some interesting places."
“.........”
A. Yes, It was such an interesting trip
B. Thank you for showing me around Surabaya
C. I'm sorry, I didn't have time to write you before I left for Surabaya
D. Thank you, I will really enjoy that
E. That's a good idea. I haven't had time to go around Surabaya
Jawab : C
Fakta dari kondisional tersebut adalah I didn't know that you were in Surabaya, so I didn't show you some interesting places. Jadi tanggapan yang paling tepat yang menyatakan bahwa tidak ada pemberitahuan.

4. If I hadn’t booked in advance, I would have had difficulties in geing good accomodation at a reasonable price.
These sentence means....
A. I got a good room and I didn’t have to pay much
B. It was difficult to get a room although I had a reservation
C. The room I got was good but rather expensive
D. I found a room in advance but in wasn't comfortable
E. I was lucky to get a good room without reservation
Jawab : E
Fakta dari kalimat conditional tersebut adalah /booked in advance, I didn't have difficulties in getting good room at reasonable price. Jadi, kesimpulan yang paling tepat adalah saya
kamar yang bagus dan harganya murah.

5. Had the make up class been an nounced earlier, more students would have attended
the lecture.

7. Anggi : Why weren't you in class yesterday?
Rindy : I was sick. If I hadn’t eaten spicy food, I wouldn’t have had a stomachache.

The underlined sentence means ...
A. Rindi had
B. Rindi has
C. Anggi had
D. Anggi has
E. both of them had
Jawab : A
Conditional type 3 tersebut mempunyai fakta: I ate spicy food, so I had stomachache

9. Lucy : Many of the participants were disappointed because they expected to have a serious talk with the minister of women's affairs
Secretary: I know I'm sure that the minister would have attended the meeting If she had returned from middle east.

10. "Why didn't you be those shoes? You seemed to like them".
"I would have, if they had been cheaper."
A. I did by the shoes
B. I was not again the price
C. the shoes were too expensive
D. I looked for a more expensive pain
E. the shoes were a bargain
Jawab : C
Karena conditional type 3 faktanya tipe 2 dan maknanya berlawanan.
"Saya akan membelinya kalau harganya lebih murah" berarti faktanya, "Saya tidak membelinya karena harganya mahal". Jadi jawabannya C. 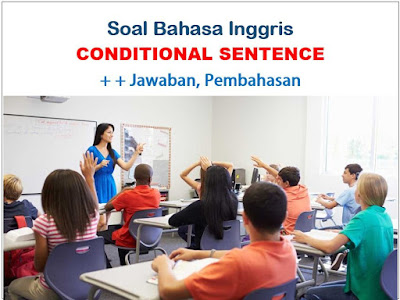 13. He .... if I had not reminded him.
A. may forget
B. should forget
C. might have forgotten
D. must forget
E. may forget
Jawab: C
Anak kalimat dengan had + V3 menandakan conditional type 3 memerlukan modal + have + V3

15. He will be late for school if he .... at once.
A. does not leave
B. will leave
C. may not leave
D. did not leave
E. had not leave
Jawab : A
Penggunaan will +Inf menunjukkan conditional type 1 dengan predikat V1 (Present) pada anak kalimatnya.

16. Your drawing was very good.
I could have done better if I .... more time.
A. had
B. had had
C. will have had
D. would have
E. will have had
Jawab : B
Conditional type 3 memerlukan anak kalimat dengan bentuk had + V3

17. If he ... more confident during the Interview, he might got the jobs he wanted.
A. were
B. would be
C. could have been
D. had been
E. was being
Jawab : D
Karena kalimat Conditional type 3 (might + have got) dan menggunakan modal maka kalimat yang ditanyakan bentuknya juga tipe 3 dan tanpa modal. Jadi jawabannya D.